Praying over the City at YWCA St. Paul – Health & Fitness. 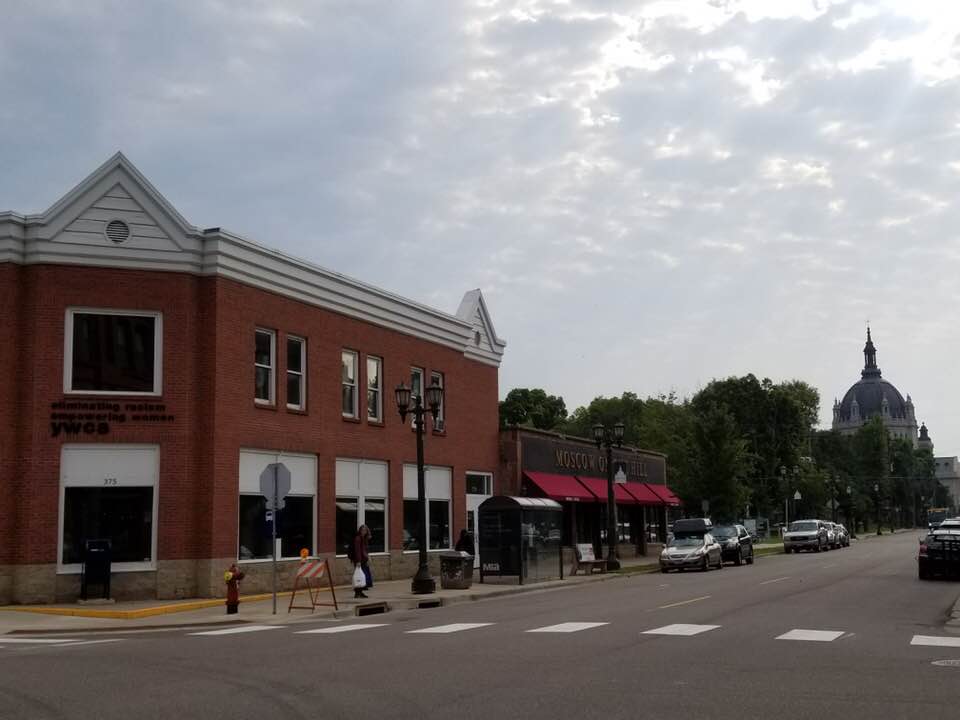 A few days ago, I created a post to discuss the first part of the YWCA motto, ELIMINATING RACISM. Today I want to share a little story that I think encapsulates EMPOWERING WOMEN.

I’ve had a very blessed business career and early on I had several promotions at a young age. At the time, I worked for a privately held insurance company whose founder had three daughters, no sons. Inside the walls of that company, I didn’t really feel discrimination based on my gender. This father had placed his daughters in key, powerful positions. This was not the norm in the late 80s and early 90s. Of course, in the field as a sale rep in a male dominated field, I encountered it all the time. More than one business meeting ended in a hug, not a handshake as would be offered to any man, but I took it all in stride. What really got me was airplane etiquette.

Such a minor thing, I know, but honestly, it tells it all. I’ll never forget my first business flight alone. There I was—the suit, the briefcase, the swagger—I had stuff going on and I was making things happen…or so I thought. LOL!

I sat myself in my seat and got busy doing a bit of work. Just as the plane was prepping to take off, a gentleman took the seat next to me as I was stowing my items. When I’d completed all my rearranging, I noticed that the man who’d just arrived took so much of the armrest that I had to cower in the corner to avoid touching him.

I remember sitting there, stuffed just about into the airplane window and thinking, “Don’t you see me here?” I was an attractive 20 something. Men noticed me all the time, not always for the good or offering a comfortable feeling, but this feeling I had never experienced. I felt completely discounted and another thought I had while trying to make myself at tiny as can be and giving this man a look, “Why do you think you can have that armrest without a consideration for me?”

You might be reading this and thinking this is an isolated instance. I am telling you, and the women reading will support, this happens all the time. So frequently that I’ve gotten good at what I call flyer’s elbows—they are glued to your rib cage for the entire flight—and I don’t believe those people, mostly men, who just take over the armrest are bad people. This is just part of society, and honestly, part of the problem we need to recognize if things are going to really improve.

I’ve flown a lot since that day and I’ve thought, even then, of saying something, but what would I say? “Excuse me, can we share?” Or what about, “Is there a reason you took the armrest without asking?” Hey, what about this one, “Do you always take the armrest? Maybe you might consider your male privilege.” Or what if I just started pushing his arm over and wiggled my little elbow on there too?

Oh my, and in that, you begin to see the quandary. Anything I might say or do will probably come off “bitchy”, domineering…all those negative things that are said about women who stand out boldly simply asking for the same space, rights and entitlements as a man.

Listen, if you hate feminism, you created it. It is your fault. If women had been treated with equal respect and dignity there would have been no use for it. Why have feminism IF women are as equally as empowered as a man? So, if you don’t like feminism, start looking around and figuring out what you might be doing that is part of the problem.

This is the deal, we need you to just share the armrest. It’s important for men to realize we have arms too, and although generally not as large as yours, we’d like some space to rest too. It’s not comfortable, and it’s not right, trying to make yourself as small as can be to accommodate someone else. Empowerment won’t happen if women just claim power and shove your elbow over. To truly empower women, men are going to need to share.

Dear Heavenly Father, it is so very easy to hurt other people unintentionally. The only way to avoid this is to have Your eyes, Your ears, Your heart, Your passion. Lord, please help us see other people the way that you see them. You made both male and female for a purpose. That glorious purpose and fitting together works in all parts of life, but only when we embrace it and are grateful for it. Please help us see where we can move over to give other people some room.

I saw this TED Talk this week with a transgender woman talking about how she did not even realize the privilege she had as a man. It’s quite wonderful and I recommend you view it for additional insight. https://m.youtube.com/watch?v=lrYx7HaUlMY

Also, if you are so inclined, read Genesis 2:18-25. I didn’t want this one to be this long. In fact, I kept thinking about this one asking God to what He really wanted me to say and now that I’ve written this twice, there you go.

Be blessed. I am praying for you.