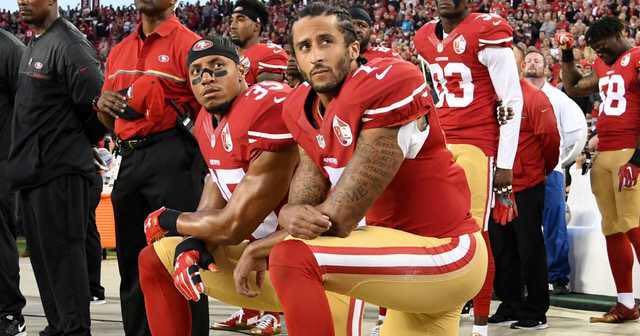 Yesterday a friend posted a parallel between a football player accused of rape and Kaepernick for taking a knee. The commonality is both would not be playing. The VAST difference between these two men—one was trying to help people, the other accused of hurting someone. Yet in the eyes of some football fans, both were doing something wrong.

I cannot look away from such things. Maybe I should have. I was on my account set to “PERSONAL”. No controversial stuff here. Just pics of my dinner and my friends. HA!

However, if we keep allowing Kaepernick’s kneel to be a ‘bad’ thing, we reduce his whole cause to a ‘non-thing’ and systemic racism is a thing—it’s a BIG thing. In my mind, Kaepernick did a brave and honorable thing. You might not see it that way, but it was, and I’m darn sure gonna keep talking about it in the hopes that maybe, maybe, maybe, you might see why he kneeled too and recognize it as a very, very good thing.

Because I chose to say so much, the discussion with other football fans got a little tangled, and one of my Christian friends liked another friend’s comment that minimized Kaupernick’s point. I chose to call him out. In response, he said some things that hurt me, yes, but speak to the problem with the Christian Right.

I am certain, beyond one reasonable doubt, I could have handled this better. What I pray for daily is Jesus’ power of truth combined with His relentless love. I can’t quite grasp it. I don’t know if I ever will, but I also wonder if the Pharisees knew Jesus loved them? Did the whites of the 1960s know MLK understood and still loved them? Do those on the Christian Right, including my friends, know that many of us speaking out about social injustice understand and love them too, yet cannot be silent about such important issues?

Can I do better? Yes, yes I can, but please do not diminish the point of the discussion because you may not appreciate the tone, and if that is what bothers you, the tone in the message, ask yourself, before you dismiss it, is there truth here I should know?

My friend dismissed my comment as “political drama”. Let’s be clear—CIVIL RIGHTS, EQUALITY, and EMPOWERING ALL PEOPLE is NOT…I repeat NOT a political issue. It has become a political issue because we NEED laws to protect people, but this is NOT politics. Much of the banter deemed politics is a HUMAN RIGHTS issue of which every human being should be concerned.

He went on to say that the drama I am creating, “keeps you (and many others” from living out effective faith.” As I try to write words to follow that, to attempt to discuss that, they fail me and I laugh out of nervousness and fear, but there is absolutely NOTHING funny about people on the Christian Right dismissing those of us calling out the many injustices.

My speaking out IS living out my faith. It’s intrinsic to the Christian faith. What do you think Jesus did? Just gave people bread, wine, and fish—then died on a cross so you could go to heaven? I am not trying to dismiss this man’s faith. NOT at all. I respect him and said so much in the post, but this statement fails to recognize all that Jesus was and is.

The religious elite hated Jesus because He threatened their power. He worked every day to elevate the poor and disenfranchised. His life’s work was to empower all—especially those left out, neglected, impoverished, and harmed. I am super sorry if you don’t like it, but I am going to do that same work every day that there is a breath in my lungs.

You can do what you like. God places different passions on each of our hearts so all His work gets done and maybe you don’t see that black people, as an example, are disenfranchised. Please then open your eyes. The proof is before you. I mean come on, you think Kaepernick risked his whole career just to piss off a bunch of football fans? Or did he see things you just are currently unaware?

What my friend also misses is how many people I have an opportunity to share my faith with that might not normally be open to it. People angry at Christians for the horrible things they’ve been doing which are contrary to our faith. I have had more atheists and anti-Christians say, “You give me hope.” Which has opened a door to share the beauty of who Jesus ‘really’ is and isn’t that what we are commissioned to do?

My friend also chose to say, “I see over-zealous political extremists like yourself causing WAY more divide amongst the Christian Faith than bringing any kind of solutions.” I don’t know, maybe that’s true. I know my passion, and my heat around these issues, as getting stronger and I just can’t shake it. I pray for guidance. I watch for defects like pride and try to remain humble. Again, I am not perfect at this. Thank God for grace.

My first reaction when I read this sentence is it again fails to recognize the “truth” of what is going on. We have a corrupt, immoral racist in the White House that has time and again broken laws and ethical conduct guidelines. There is proof of all of this and the whole reason we can’t get rid of him is people still support him. They do not see or do not care to see what is really going on. The problem then is BIGGER than Trump. The problem is a societal issue that allows this deception to have power.

The solution then, and what I am working for, is to open people’s eyes. The thing my friend objects to, my radical stance to share the truth, is my solution. The depths of corruption the Christian Right is willing to support is mind-boggling and my friend sees my choices as the problem? This makes absolutely no sense to me. Like I said to him, I love and respect him. Arguing will do no good, but all of this weighed heavily on my mind all night. What is the best course of action?

For this reason, they could not believe, because, as Isaiah says elsewhere: “He has blinded their eyes and hardened their hearts, so they can neither see with their eyes, nor understand with their hearts, nor turn—and I would heal them.” Isaiah said this because he saw Jesus’ glory and spoke about him. Yet at the same time many even among the leaders believed in him. But because of the Pharisees, they would not openly acknowledge their faith for fear they would be put out of the synagogue; for they loved human praise more than praise from God.

I don’t know why so many of my Christian friends cannot see things in the same way as I do. I know God has brought me on a journey of greater understanding. Classes and forums on racial bias. My own personal rape and my reaction as wells as others. God was the one who opened my eyes. The best thing to do then is to pray.

Dearest Heavenly Father (Mother), please guide me in action and deed so that I might share the truth with your relentless love. I pray you open our eyes to the Holy work you would have each of us do. How might we all best reflect your love, grace, and mercy back to everyone here on earth. Your Kingdom come…in Your Mighty and Holy Name…

P.S. New vantage point in my home. I couldn’t get myself up early in this rain to head out to the gym and I’m now typing this out WAY TOO late. It’s 9 a.m. with other work deadlines looming, it is not the headspace or environment I prefer to write. Alexa tried to wake me, but I rolled over instead. It was lovely while that lasted, but keep praying that I find a better routine.

Praying Over the City in South Saint Paul, Minnesota