Praying over the city at Bread & Chocolate. 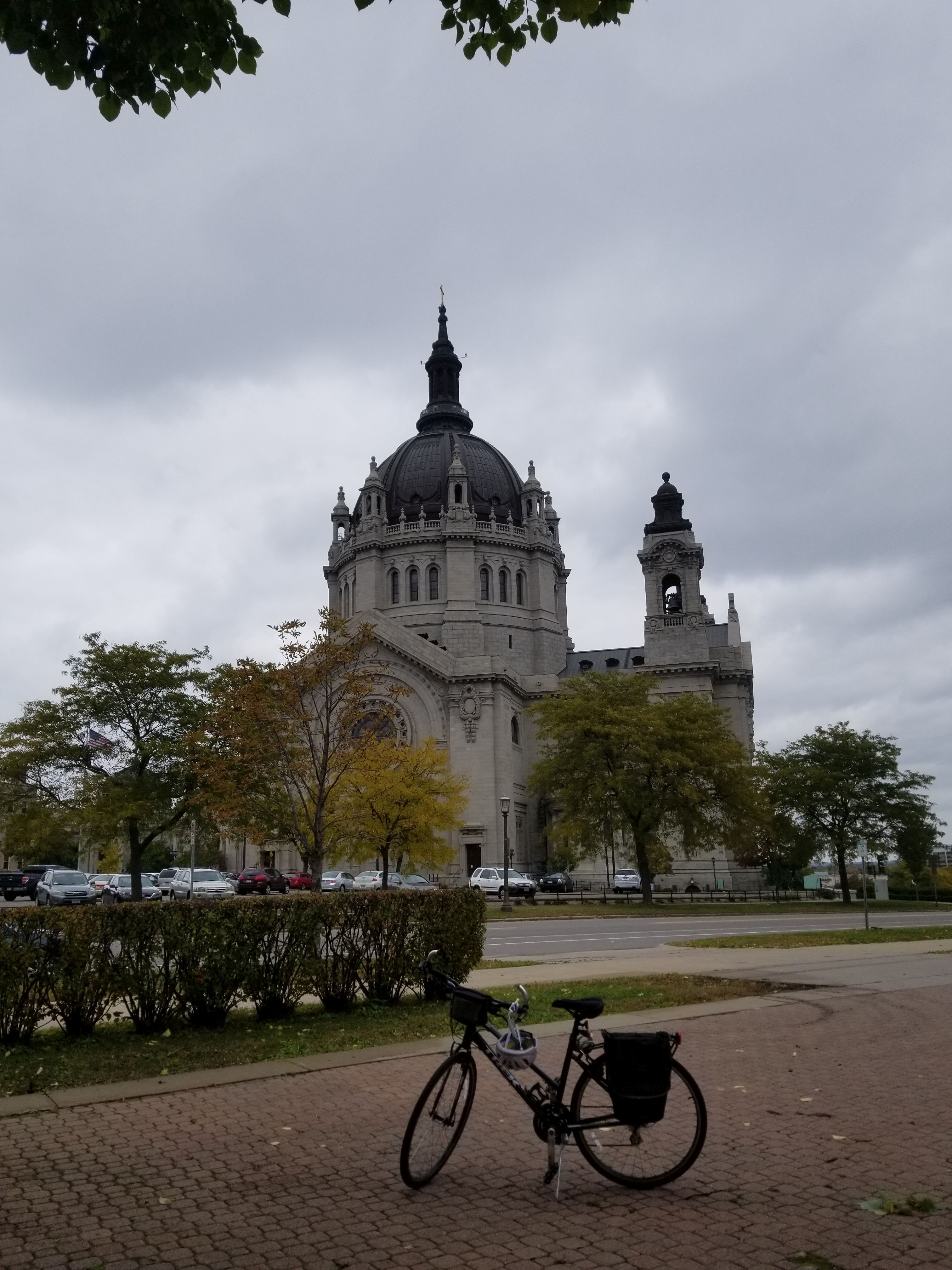 I miss my rides already. Granted, I could have ridden my bike today. It’s not raining, and I was up in plenty of time, but it was 30 degrees—yes, 30 degrees Fahrenheit in October—and the wind was brisk. As Pooh might say, blustery. This is not a great combination for a fair-weather person like me. Top it off with the fact that I had little time this morning. Just a couple of hours so I drove to the gym and hassled with parking at the coffee shop. This picture was taken last weekend when I stopped in this lot to pray and capture a new vantage point of the Cathedral I love so much.

Yesterday in my readings, I hit Luke 8:22-25 and I considered this from a whole new perspective—at least for me. If you are not familiar with this section, it’s when Jesus suggests they get in the boat and cross the lake. Then a major storm ensues. The NIV calls is a SQUALL. Sudden and violent are used to describe a squall.

Based on the story, it almost seems as if Jesus planned all of this, right? Like, “Hey, let’s cross the lake.” But also knowing the storm is coming—or even better yet, calling the storm in. The extra layer of intrigue here is Jesus is sleeping. It’s almost as if He decides to bow out of this whole experience to see how they react.

They’re frightened and understandably so. The boat, by these accounts, sounds as if it might sink. The verses don’t say they are frightened though. Not until later, after Jesus calms the storm. When they believe they are in peril, they wake Jesus.

This seems perfectly logically. After all, many of them have seen the miracles thus far and may believe Him to be the Messiah. He for sure is their leader and they trust him implicitly—at least by all accounts. So, to wake Him seems a very reasonable course of action, yet after Jesus calms the storm, He then turns to the crew and says, “Where is your faith?” (Luke 10:25)

At first, this seems unfair. Their faith is with Him and in these circumstances, knowing who He is, it seems perfectly reasonable. However, I think Jesus had hoped they’d have reached to the Father. That they had prayed. He would be here such a short time, and each would need to develop their own relationship with Him. Prayer and direct contact is the only way to go. Hence, “Where is your faith?”

I am so guilty of this too. During my own storms, I just barrel ahead. I somehow figure God is with me and He’s got the outcome, so I just start trying to get things done. Raising the sail. Rowing to the left, or to the right. Whichever seems right to me at that moment. Battening down the hatches and any other thing I can think of to stop my boat from sinking. Far too often, I wait until the storm is over, or I’ve exhausted anything I might think to do, for me to reach out to Him. In the middle of all of this, why don’t I just stop to pray?

It reminds me of another story I love that is about one of the founders of Alcoholics Anonymous, Bill W., which is contained in the book of the same name also affectionally called, The Big Book, page 154. Bill was discouraged by a failed business deal. Newly sober, he sat in the hotel lobby snapping his attention from the bar at one end and then the phone. He was in a storm of his own. On the one hand, he could enter the bar, have a drink or two (or more) and find someone to chat with for the evening. All of this seemed a perfectly reasonable way to sooth his depressed mood. Or he could use the phone to reach out and find someone he might help to gain sobriety. He vacillates between the two choices for a while until he thinks, “What about my responsibilities…” He claimed sanity returned and he thanked God.

Just like me. Bill waited until the storm was over to get God in the mix and to express his faith. No wonder Jesus asked, “Where is your faith?” We should express our faith by asking for God’s help, guidance, and wisdom as soon as the storm comes.

Dearest Heavenly Father, you are the Master of the Universe, The Creator. You can bring the storm and you can calm it. I need to remember every day, every minute, every moment, that You are there with me and to express my faith, I should call on you in the storm. Thank you for Your grace. Thank you for Your love. You bless us in so many ways. In Your Holy and Mighty name…

If you’ve got prayer requests, please bring them forward. I love my Spiritual connection to you.