Praying over the city at Groundswell Midway. 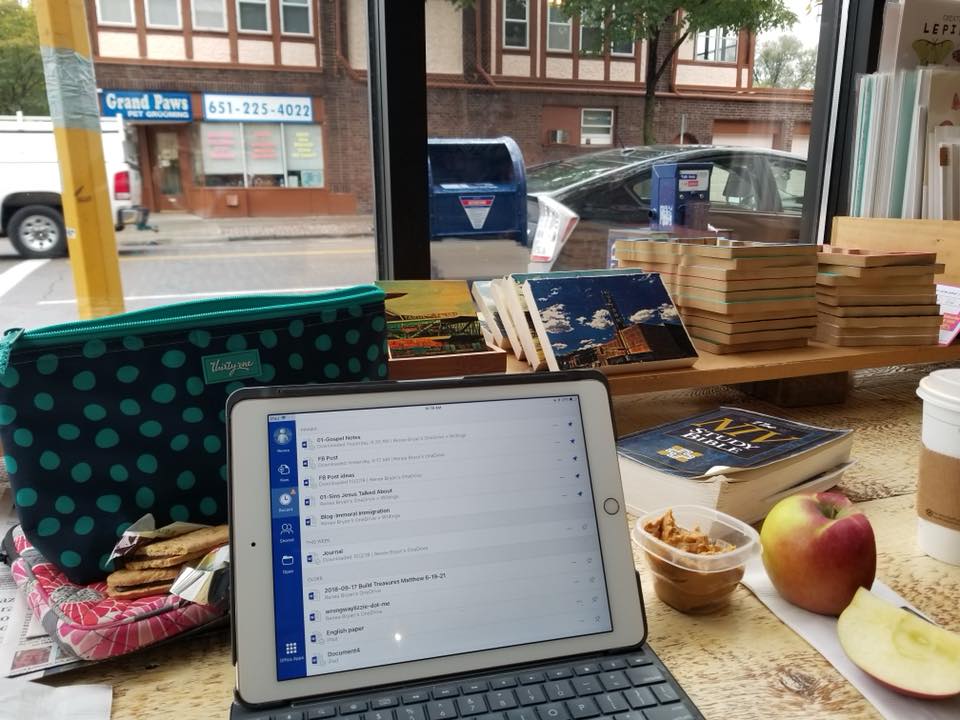 With the fabulous encouragement of my friends who supported me, I went to yoga this morning. I’ve been meaning to do it. I knew it would help stretch, strengthen, and relax me. The biking and the weight training had tightened me up and I really wanted to work yoga into the mix. I was scared though—intimidated, and my friends talked me through. They told me no one there would judge me. That we are all on a journey.

I arrived early. There was one other woman there, against the far wall. I figured she was the instructor, so I took a corner as far away as possible. I wanted to be hidden in this class. Turns out she was just another class participant and when the real instructor came in at exactly 8:30 to take center stage right near me, I realized I took the exact wrong corner for privacy. Everyone behind me was looking my way (if they chose), and when we faced the mirror in front of me, everyone had to try to look beyond ME to see themselves. When I fell over in the Triangle pose, with everyone facing my direction, I was oh, so grateful for all the encouraging words my friends had shared. They helped me to feel safe and strong.

While in one of my many poses during this class, it dawned on me that this is not unlike all of us sexual assault survivors coming forward. It’s scary to make ourselves vulnerable—to be seen, bringing what we tried to hide into the open for all to see, and more than anything, we need to know it is and will be okay. That even if we stumble, encouragement will be offered to help us regain our strength.

This is what survivors need, and if you asked ANYONE if someone they loved came forward with allegations, each one will probably claim they would “encourage” that person. Yet WAY TOO many of you are running around damning a woman who admittedly only came forward to tell you of the character of this man. If you are one of MANY who have taken this stance, or anything that resembles it, you have absolutely NO idea the damage you are doing. NONE.

Last night a man I’ve known for a few years told me of his sexual assault. I was honored he shared. I was further humbled because he said it was my bravery that helped him decide that it was time to speak up. To be one of the numbers counted on the side of sexual violence, to illuminated what has been held dark, so you can see our numbers—the MILLIONS abused in the face of the MAYBE thousands falsely accused. I am so proud of him. So very proud that he followed God’s call on his life and now stands poised to better heal and help others.

I’ve been sickened by what I see around me. Part of me feels bad saying it like that, but it’s true. Even when my friends did not believe me, I couldn’t believe it. Seemingly “nice” people continuing to victimize a victim because they refused to believe me. What’s worse, the man who raped me suffered no consequence and do you think he probably did this again?

I’m done having weak boundaries about this—if you chose to cling to rape apologist ideals, you are hurting millions of people. PERIOD. If you feel God’s tug on your heart, that maybe, just maybe, what you thought was right isn’t right, please start asking us survivors. Anyone of us, I would hope, would gladly help you see things from another perspective.

When I consider what is happening to victims of sexual assault, I am reminded of how Job’s friends treated him:

Job 2:11-13 (NIV) When Job’s three friends…heard about all the troubles that had come upon him, they set out from their homes and met together by agreement to go and sympathize with him and comfort him. When they saw him from a distance, they could hardly recognize him; they began to weep aloud, and they tore their robes and sprinkled dust on their heads. Then they sat on the ground with him for seven days and seven nights. No one said a word to him, because they saw how great his suffering was.

What a beautiful thing to do for a hurting friend. Granted, in the end, they didn’t treat Job very well. It’s quite difficult to read in later chapters, but maybe we should all ask ourselves what kind of friend do we want to be? The one that helps, encourages, and supports? Or that brings on more shame, hurt, and harm?

Dearest Heavenly Father, You are the only one who knows a heart. Please help us to heal our friends. So many are hurt, and Lord, to the people who have committed these violent acts, may they too begin to see the damage they have done and work to heal themselves and well as do right by the people they have hurt so terribly. We know this is a broken world, Abba, and we must start with You to make it better. In Your Mighty and Holy name…

If you have any prayer requests, please bring them forward. I care deeply for you.