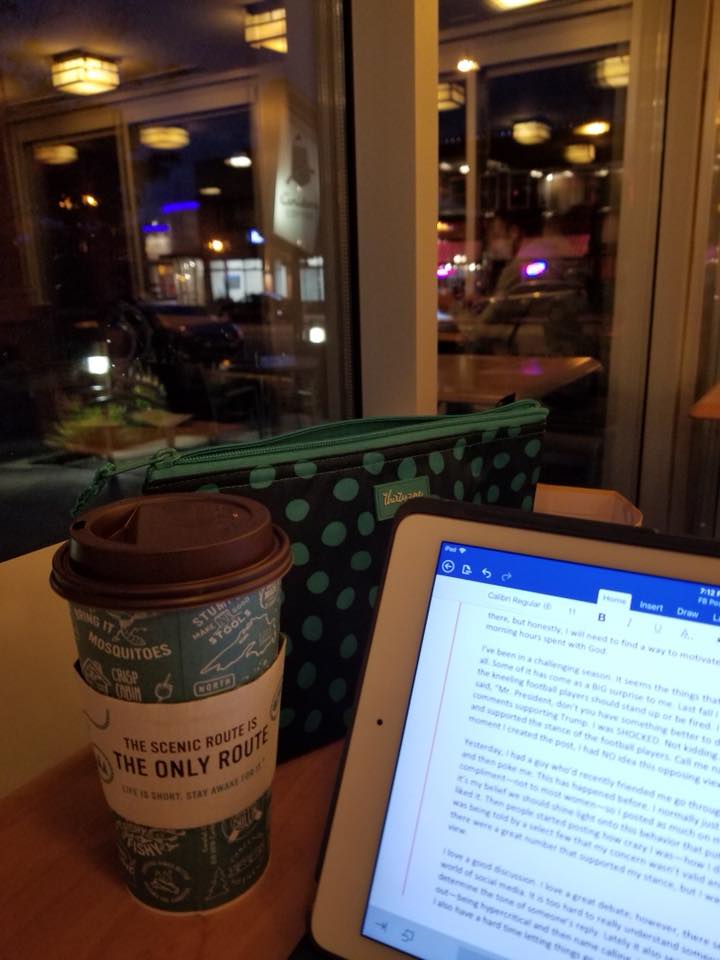 I’m trying to write today’s prayer in the evening. I already can tell these colder temps and shorter days are going to be a challenge for the schedule that I’ve loved this summer. I miss waking early and finding the sun was already waking with me. It’s getting far too easy to rollover when the alarm goes off. It’s cold out there, but honestly, I will need to find a way to motivate myself because I love, love, love those early morning hours spent with God.

I’ve been in a challenging season. It seems the things that I am passionate about are not well received by all. Some of it has come as a BIG surprise to me. Last fall I saw that President Trump had Tweeted that the kneeling football players should stand up or be fired. I posted something on Facebook that basically said, “Mr. President, don’t you have something better to do than this?” To which I had a flurry of comments supporting Trump. I was SHOCKED. Not kidding. I seriously thought more people understood and supported the stance of the football players. Call me naïve. Call me crazy, but seriously, at the moment I created the post, I had NO idea this opposing view.

Yesterday, I had a guy who’d recently friended me go through my profile pics, liking about 20 of them and then poke me. This has happened before. I normally just block them. This is creepy. It is NOT a compliment—not to most women—so I posted as much on my Facebook. In this day and age of #metoo, it’s my belief we should shine light onto this behavior that puts women at risk. At first, a few people liked it. Then people started posting how crazy I was—how I didn’t understand Facebook…essentially, I was being told by a select few that my concern wasn’t valid, and I should get over it. On the other hand, there were a great number that supported my stance, but I was literally again, shocked by this opposing view.

I love a good discussion. I love a great debate; however, there seems too many hazards lately in the world of social media. It is too hard to really understand someone’s intent. It’s also equally as difficult to determine the tone of someone’s reply. Lately it also seems that people are more emboldened to lash out—being hypercritical and then name calling. It seems to be the culture lately, or maybe it always was. I also have a hard time letting things go and feel the need to reply, explain, or inform. This, far too often, isn’t the best response.

A friend last night said we are in another renaissance, “It might take another 50 years or more to shake out, but things will change in the end.” He went on to say that he thought I was also in a renaissance. Oh yes, yes, I am. I feel things changing and transitioning, and as anyone in this point of unfinished work, it’s scary, difficult, and painful. Honestly, if things are going to transition to something new—a hopefully better new—we are all probably in a bit of a renaissance.

Thought for you to consider, at the end of the Renaissance period, we didn’t decide, based on the evidence, that we were right in the beginning. That the world was indeed flat and the center of the Universe. No, by the end, through kicking and screaming, we decided to move on to the ideals a few brave had prescribed from the very beginning. Those that were thought to be too progressive. The ideals that people feared in the beginning and the ideas that many fought against. In the end, much of that became the truth of the new Renaissance age.

At this point then, it’s wise to consider why we believe what we believe. Is it part of a story we’d been told? Is it really the truth? Are parts of the motivation selfish? Am I afraid of change? What makes logical sense? What is fair to the greatest number? Maybe peek at things from a different perspective.

Consider this, did it really change much of anything when we accepted the sun was the center of the Universe? What did one “really” give up accepting that new reality? Yet people lost lives over this minor change in perspective. Let’s not do that again. Let’s work together to make sure we do not hit that extreme.

Romans 12:2 (NIV) Do not conform to the pattern of this world, but be transformed by the renewing of your mind. Then you will be able to test and approve what God’s will is—his good, pleasing and perfect will.

Dearest Heavenly Father, the future we are so afraid of, You already know. We have no need for fear. You are with us and You have made the way. As we look back through history, each generation has made improvements. May we too be part of the transformation that will bring us to your pleasing and perfect will. In Your Mighty and Holy name…

Love you all. If you have a need, please bring your prayer request to me.