Praying Over The City in Saint Paul, MN 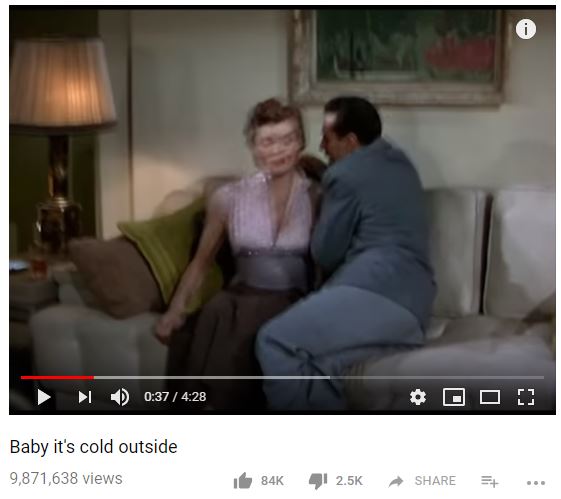 A bunch of people right now are up in arms because radio stations decided to ban the song, “BABY IT’S COLD OUTSIDE” because of it’s suggestive and triggering lyrics to the #metoo movement. I’ll admit, even though I am a three-time sexual assault survivor, I had always thought this song to be a cute, flirtatious end to a date and a fun song at Christmas time UNTIL people started talking about its toxic and predatory nature.

It reminds me a little bit of watching ALL IN THE FAMILY today. I remember watching it in the 70s, laughing with my family, considering, like much of America, that it was “progressive” for its time. All any of that meant was us white folks were finally taking our racism out of the closet and putting it on national television. It might have been “progressive” in the fact that we were finally getting honest that maybe all these racist attitudes are so ridiculous it’s funny, BUT to watch it today, now 40 years later, well, it’s disturbing. The jokes aren’t nearly as funny because it’s hard to see past the truly harmful nature of racism and sexism.

I now see the song, “BABY IT’S COLD OUTSIDE” through that same lens. Read the lyrics. I’ve posted them below. When you do, I encourage you to try to remove the cute little ditty you might hear in the background and consider this to be a witness account instead—like in a trial. Over and over she tries to leave. Politely. Like women have been trained to do, and repeatedly, he tries to push staying. She even says, “I really must go, and the answer is no.” His response is to continue to persist—ignoring what she is saying and doing (see movie clip on YouTube).

This photo is just one time during this song in the film NEPTUNES DAUGHTER, where this song gained popularity, when she is trying to leave, and he is physically attempting to block her. I encourage you to watch the whole thing. Many times, her face is indignant. Her body language time and again suggests she is frustrated by his insistence, and yet, he continues. One of her lines is even, “What’s in this drink?” And as she puts it down, she scurries away, him in hot pursuit. He takes her jacket, he takes her purse, he takes her hat, and he blocks her. He is doing whatever he likes to keep there regardless of what she says or does.

This is predatory behavior. Plain and simple. There might have been a time we didn’t see any problem with this, but there is a problem with men thinking they know what’s best for women and forcing their will on them. PERIOD.

In defense of this, I’ve heard people say, “There are songs that are worse.” Okay, just because there are songs that disparage women even more than this one, that does NOT make the portrayal of this song right. This is NOT a logical defense of something that’s bad. You’ve heard the saying, “Two wrongs don’t make a right.” Correct? Great. Apply it to this excuse.

I’ve heard others say, “I always thought she really wanted to stay.” UGH! This one makes my eye want to twitch. (This happens to me when so overwhelmed with outrage, I’m not sure what to say or do.) I used to think that too but listen to what she is saying. She, repeatedly, says she wants to go. We need to listen to what people are saying and respect them enough to do what they need or want to do.

This concept of just listening includes truly considering what the #metoo movement is saying about this song. You really are going to defend a song over the 40 million women in America alone who have been sexually assaulted? You think it’s more important to ignore the cares and concerns of people who have survived this sort of damaging event because you want to hear a little ditty at Christmas?

At reading this, you might be thinking, “I’m tired of a small group of people deciding they are offended by something and it changes what I like or value.”  Get ready here—if you believe this, there are some concepts coming up that might blow your mind.

This is called PROGESSION and while you might be a traditionalist, wanting to hang on to the values of old, when you look back into history, we generally appreciate what the small group of progressives were trying to do. Heck, we would still believe the world flat, that black people should be slaves, and woman are too dumb to vote without a small group of people who believed things should change. What history also tells us is the traditionalist LOSE. Those that wanted to keep the bus segregated are now looked at as ignorant, hateful people.

Women can tell us what they want and need. We do not need a man or anyone else to think for us. A great many of us love sex and we like it even better with a partner who truly respects us. There’s a book in the Bible, SONG OF SOLOMON, which is a love song between a man and a woman. She is very direct about her passion for him and he NEVER, not once in the song, pushes her into anything. He has no need to. Her desire for him is direct, clear, and abundant. That is how it should be.

Back to the song, BABY IT’S COLD OUTSIDE, and making the effort to just listen, what if the man here, instead of pushing his agenda on her, took the time to care enough for her to ensure she got home safely? What if he just listened to what she wanted and needed, putting his desires aside, to be a helpmate to her? How might that have been so much more romantic than this other twist? I know for myself, the man who helps and empowers me, not hinders me, he’s the one I’d really want. There is nothing sexier than a man using his power to elevate and protect the people around him.

Dearest Heavenly Father, you created woman to be a suitable helpmate to man and we are to be united as one. (Genesis 2:18-25) One would not want to hurt any part of themselves, yet men and women hurt each other all the time. Please help us to see past our individual selfishness and allow us to listen to the concerns of another so that we man truly do your will, living in love and harmony all our days. In Your Mighty Name…

If you’ve got prayer requests, lay them on me. I love you, tons.

Here are the complete lyrics from the 1944 version of the now-controversial song:

(My mother will start to worry) Beautiful, what’s your hurry
(My father will be pacing the floor) Listen to the fireplace roar
(So really I’d better scurry) Beautiful, please don’t hurry
(Well, maybe just half a drink more) Put some records on while I pour

(The neighbors might think) Baby, it’s bad out there
(Say what’s in this drink) No cabs to be had out there
(I wish I knew how) Your eyes are like starlight now
(To break this spell) I’ll take your hat, your hair looks swell

(I ought to say no, no, no, sir) Mind if I move in closer
(At least I’m gonna say that I tried) What’s the sense of hurting my pride
(I really can’t stay) Baby, don’t hold out
[Both] Baby, it’s cold outside

(I got to get home) But, baby, you’d freeze out there
(Say lend me a coat) It’s up to your knees out there
(You’ve really been grand) I thrill when you touch my hand
(But don’t you see) How can you do this thing to me

[Both] Baby, it’s cold outside